Marta and I have a confession to make, we’ve never shot an Indian Engagement Ceremony.  Yup.  This is our first one.  There are plenty of things that came up when we were researching how to go about it.  We were trying to make sure that everything that happened the day of went as smoothly as possible.

The day of was a bit of an adventure for me.  I had an idea of what to expect, but actually being there was different.  We witnessed what was the beginning of the union of two families in an even larger community.  Many of the people that were there were part of the church that Jaisy and Stence were a part of.  It was very large with over 250 guests, but, even with so many people, there was a certain level of love and community there.  The entire event felt like everyone was family.  It felt like everyone knew each other and was willing and able to share that love with everyone, including us.

“Everyone kind of just popped up for the Indian Engagement Ceremony.  It was unique.  It was full of prayer.  The ceremony was full of stories and a few jokes as well.”

The celebration started a little later than planned.  Everyone got there at the same time though.  The event space at Wyndham Orlando filled up quickly.  Everyone kind of just popped up for the Indian Engagement Ceremony.  It was unique.  It was full of prayer.  The ceremony was full of stories and a few jokes as well.  Primarily for the groom-to-be’s brother.  I won’t repeat what was said though.  Let’s just say it was good times.

After the Indian Engagement ceremony was over, the papers were signed, and the formals were taken,  we decided to step outside.  For January 3rd, it was hot.  I mean seriously hot.  Florida can be quite fickle.  Isn’t it supposed to be chilly in January?  Anyways, we stepped outside and spent some time with this amazing couple.  Stence is amazingly down to earth.  Jaisy will be his rock.  The love shared it is quite beautiful.  You could see the sparks fly between these two.  So excited for them. 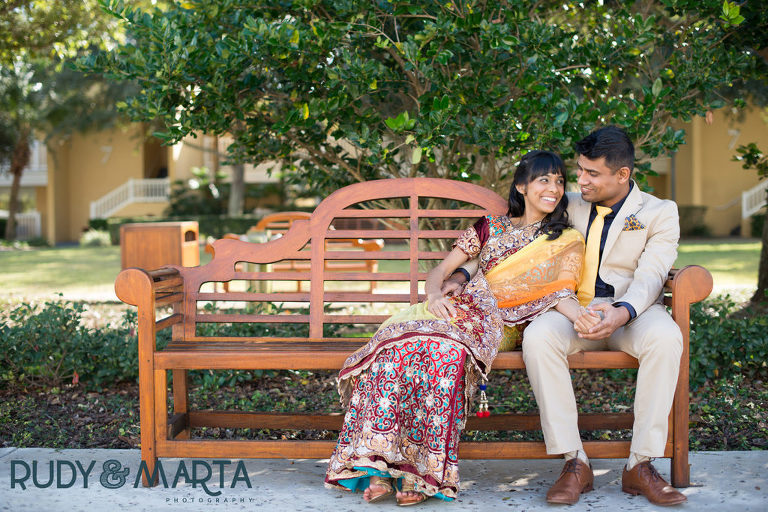